Many patients will choose a colour for their sunglass lens based on cosmetics, :what will look better in my frame?” I like to approach selection based on visual performance rather than on cosmetics. I tell the patient that once you are wearing the frame the lens just looks dark and people can’t tell what colour the lens is so let’s choose what you like to see the world as instead of what the world sees you as.

That said how do you choose, and what performs the best?

Definitely not as easy to confront as “your frame is black go with grey.”

The two most common colours are Grey and Brown. I find that in northern countries grey is the most popular and as you get further south Brown gets more popular. That may have something to do with the way they perform against different environmental backdrops. When we look at Grey vs Brown ultimately they do the same job. They block the same amount of visual light, they block the same amount of UV light. I have metered a brown and a grey lens, they both show virtually the same amount of light transition. As a polarized lenses they filter glare equally too. 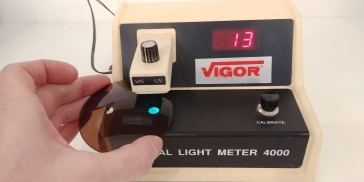 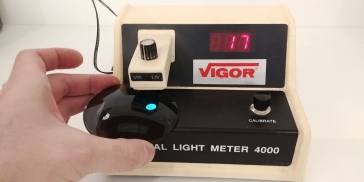 So where is the difference?

The difference comes in how much of each colour the lens blocks. If you look at the algorithms of what light is being blocked we can see there is a difference in some of the colours being blocked by brown than from grey. From that we can infer how people are going to see colour, and light in general, differently through each colour. Never try to explain that to a patient. Getting too technical will leave most confused and irritated that you like to use big words. Though I think it’s important for an optician to have some understanding of colour in this way, so check out the chart.

Then, in the language that you can use with a patient.

Grey lenses are more colour neutral (they block about the same amount of every colour). It effects colour less and just makes things less bright. Brown effects colour, so some colours are diminished, (Blues and reds). Other colours are accentuated, (greens and yellows). Because of this we perceive better contrast through brown lenses and so they appear lighter than their grey counterpart even though they are blocking the same amount of light.

Brown people often are looking at green and they like things to brighten up a little to be more comfortable.

So, think of a patient who drives and is looking between the white clouds and black road, or sails and looks at blue water and whitecaps. These people prefer grey because brown makes the whites dirty. They dislike the washed out colours that brown produces because their environment is primarily the diminishing colours in a brown lens.

A patient that hikes a lot is looking at trees and meadows, a lot of natural colours like browns from dirt, trees and animals. These colours are all accentuated by the brown lens. I also personally like the brown lens because of how it is not overly dark on a cloudy day.

Again, as with many selections we make for our patient, the most important question we ask is, “How do you use your eyes?” After finding out what the glasses are being used for and what our patients are going to be looking at, then we can make a good recommendation. I like to put drivers, boaters, readers into grey. I like to put hikers, campers into brown. People who jog or bike you have to ask them where they jog, in the park or around the city. You get the picture of where I’m going. See what they are looking at while they wear these sunglasses and give a recommendation based on what you know about the performance of each lens.

They come along and introduce the G-15 lens. Your supplier may not call it that because it is trademarked for Ray-Ban so everyone else calls it green.

How do they fit in?

Green matches the algorithm of how our eye sees colour and so, even though the lens looks coloured, we see less colour distortion through it. It blocks all the colours more evenly and is perceived to be darker than other lenses even though it also has virtually the same light transmission as the brown and grey lens. Patients that tell you they want them even darker will like the G-15 lenses.

Traditionally our industry has supported the notion that polarized lenses are king. If you want the best you need polarized lenses. Since polarized lenses are only readily available with most suppliers in one density, 85%, we cant just give our patients a darker lens. We need to use our colours to our advantage to give them what they will perceive as a darker lens. G-15 or green being the darkest, then grey being lighter and brown being the lightes. As opticians we often play that angle with colour selection. Patients who drive a lot at dusk or in an environment that is often overcast will enjoy the brown lens.

Another more rare choice is a pink lens. Serengeti makes a colour they call sedona, Maui Jim makes maui rose, Oakley makes vr-28. They are all a kind of rose grey colour. Again, they block about the same amount of visual light but because of the colour distribution you will perceive a lot more contrast enhancement than even the brown. It does make things look a little red though so while it does a great job of improving contrast you will sacrifice the colour neutrality. This colour is also hard to find in RX lenses especially from other suppliers. Many suppliers have taken the green lens on but don’t want to get into the rose colours.

Sporting companies have started to move away from the polarized is king motto and are bringing out a lot of performance colours that are sport specific. A golf colour or tennis colour that performs exactly the way a person wants for that specific sport. Improving green or contrast between green and… other green. These lenses rarely come in polarized versions and are still very comfortable lenses for what they are designed for. Though trying to drive in a golf lens doesn’t help you out much and definitely doesn’t compete with a nice driving lens in grey or brown.

It’s also important to discuss a little bit about polarized lenses even though it’s not colour related. The polarized lens is loosing ground as of late because of the LCD screen. Because liquid crystal technology is based on a polarized filter, it is hard to see some screens while wearing polarized lenses. Polarized lenses have always had their quirks, diamonds in the windows and such, but, as more people use LCD devices it is becoming less of a quirk and more of a hazard. Some jobs even restrict the use of polarized lenses because of this. It becomes impossable to read instrumentation or see computer screens and GPS devices.

In any case, polarized or not, choosing a colour is the same. There are more options with tinted lenses, we can pretty much match any colour you can bring a sample in for. Still, grey and brown seem to be the two main colours for sunglasses, even for tints, so choosing a colour that is best for your patient will mostly go the same way. Also for for photo chromatic lenses. Typically just grey and brown for them as well. Choose what is going to perform best for their needs.

So, selecting the best colour is really selecting the best colour for that individual. Grey is more colour neutral, brown improves contrast. Ask a patient How they use their eyes, then make a recommendation. If you need further direction, let them wear some samples, most stores should have a grey sunglass and a brown sunglass they can try on. Give the patient the knowledge to select for themselves what they feel best suits them.

Every ones opinions and experiences matter so comment yours or if you have further questions please ask them so we can all learn together.

Like this page and you will get notified when I update with a new topic.